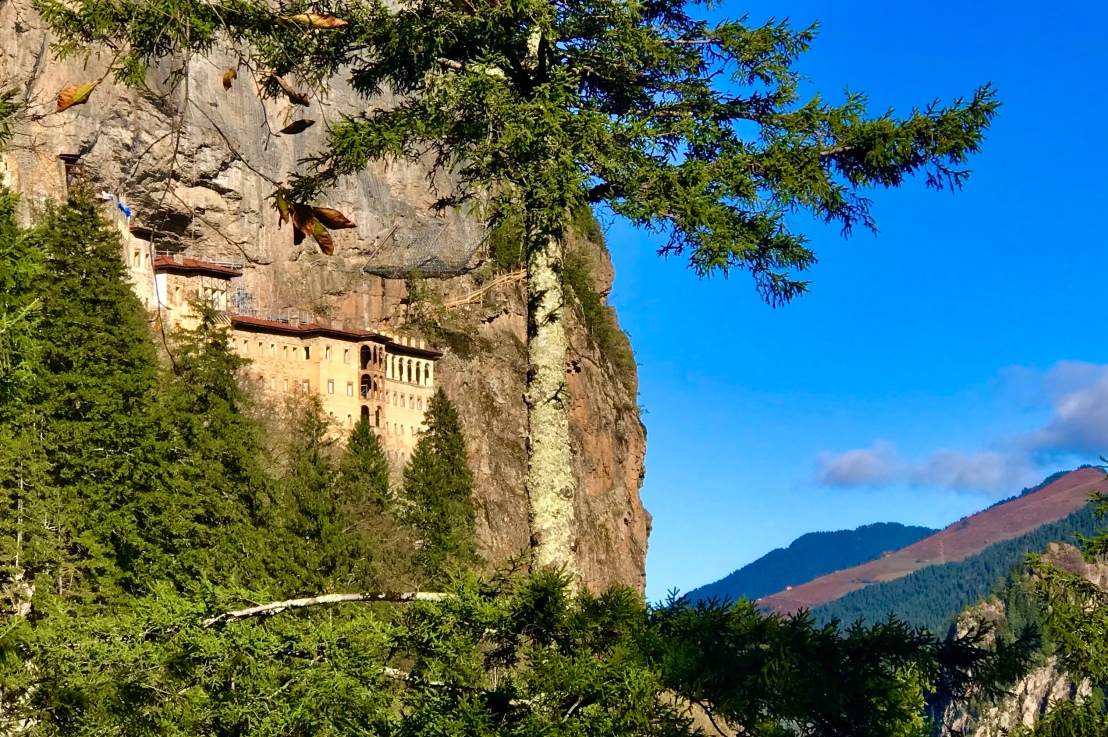 When traveling it is always best to learn to expect the unexpected. The best laid out travel plans can sometimes be derailed, and spontaneity may land you with a serendipitous find.

Trabzon isn’t your typical Turkish holiday destination. Most people stick to Istanbul, Cappadocia, Pamukkale, and the Western coast. Very few venture into the Black Sea region that borders Georgia and Armenia. As a result, few people here speak or understand English. The biggest attraction here in Trabzon is the Sümela Monastery that is built into the rock wall, and that was the main reason why I had booked a flight out here for a day (Joe, with his infinite wisdom, wasn’t convinced it was worthwhile).

Sümela is a Greek Orthodox monastery established in 386 BC first as a cave church, and built upon and expanded through the years. The monastery was abandoned in 1932 when the Greeks were exiled from Turkey. Since then the monastery’s been looted and vandalized, but subsequently restored as a museum and a place of pilgrimage. It was closed in 2015 due to rockfalls and only partially reopened this summer as restorations are still ongoing. Recent reviews on TripAdvisor had indicated that only 20% of the site was open, and some griped that they were still charged 50TL to see a partially opened Monastery. I thought it would still be worth it because how often does one get to stand in a monastery built into the rock wall? My only question is, what have they been doing for the last five years that only 20% had been restored?

Imagine my disappointment when the park attendant told us that it was closed! Apparently, there were rockfalls again, and they closed the site just a week ago! We could still drive into the park for 10TL, take the dolmus from the parking lot for 6TL (or you can hike up), and look at it from a distance. Which is exactly what we did, because I’m not going to fly all the way to Trabzon and leave empty handed (Joe was right again).

A prime example of a travel plan derailed. Since we had the car and extra time, we decided to check out the town of Rize, east of Trabzon. The Black Sea region is also known for where the nation gets its tea, so we wanted to get a chance to see some tea plantations.

Our initial plan was to drive further east to check out another town, but on our way to Rize, we saw a sign for Uzungöl with a brown background. Signs with brown backgrounds in Turkey usually indicate a sight, park, or something of interest. While back in Trabzon, I recall seeing a sign for Uzungöl advertised on the window of a closed tour company. A quick Google search changed our course. Uzungöl it was.

On our way to Uzungöl, we picked up a 70-80 year old hitchhiker. Our very first hitchhiker! It appears that hitchhiking isn’t uncommon in Turkey. We’ve seen a few throughout our journey here, but have always shied away from actually stopping. Worried about meeting an ax murderer, but always tempted to stop. Today, we finally did. It didn’t hurt that the man looked ancient and had a cane. There really wasn’t any concern that he could swing an ax. The man spoke no English. Some hand gestures implied that he was possibly going where we were headed, since that was the only town at the end of the uphill road. We suspect he does this all the time, because he gave us no acknowledgement after getting out of the car, and quickly joined his fellow tea mates ready for the afternoon gossip.

A scenic stroll around the lake after lunch quickly erased all the disappointment from this morning. We don’t regret flying here only to miss what we had planned to see. We managed to get a sense of what Trabzon is like, observe that the Turks here look more Caucasian due to its proximity to the Caucuses, taste some Black Sea cuisine, visit an unexpectedly scenic place that’s not in the guidebook, and pick up our very first hitchhiker. I would say that this side trip was worth it.